It is becoming increasingly difficult to observe still-living individuals of Pinna nobilis, the largest endemic bivalve in the Mediterranean Sea. This species, now considered ‘critically endangered‘ and included in the IUCN Red List, is threatened by disease, caused by the combined action of micro-organisms, including protozoa and bacteria. In recent years, this has led to unprecedented mortality of P. nobilis, drastically reducing its population on a Mediterranean basin scale. The LIFE Pinna project aims to counter this phenomenon and safeguard the species from extinction.
Finding surviving healthy individuals of Pinna nobilis is essential to protect them and to study their genetic and ecological adaptability. To succeed in this endeavour, everyone’s help is needed: not only scientists but also divers, yachtsmen and anyone who loves the sea and its biodiversity. These large molluscs are now rare along our coasts, and every report of live individuals is valuable and helps to increase the species’ chances of survival.
Your entries will be verified by LIFE Pinna scientists and for those that prove to be the most significant, there will be prizes in the form of books, gadgets and the opportunity to visit the research laboratories involved in the project. It is therefore a real treasure hunt.

How to report Pinna nobilis

By filling out the form below you can report a new sighting, but first, it is important to check a couple of things. It is always advisable to take a photo or video. If possible, take the photo from above so that you can see the animal inside, so that LIFE Pinna experts can validate the sighting.

1.Go to the right places. Pinna nobilis is most commonly found on sandy, almost lagoon-like bottoms, it likes environments protected by strong seas and posidonia meadows. It is embedded in the sediment for about 1/3 of the shell length (so it protrudes more from the bottom).

2. Observe well. Whether you’re diving or just wearing a mask and fins, in a kayak, boat or sup: sharpen your eyes! Pinna nobilis has a fairly smooth shell, with no ribs and randomly scattered outgrowths all over the surface of the shell. The edge of the mantle is usually pink.

3. Do not confuse Pinna nobilis with its sister species Pinna rudis and Atrina fragilis, and with genus Pinctada

The distinctive features are as follows: 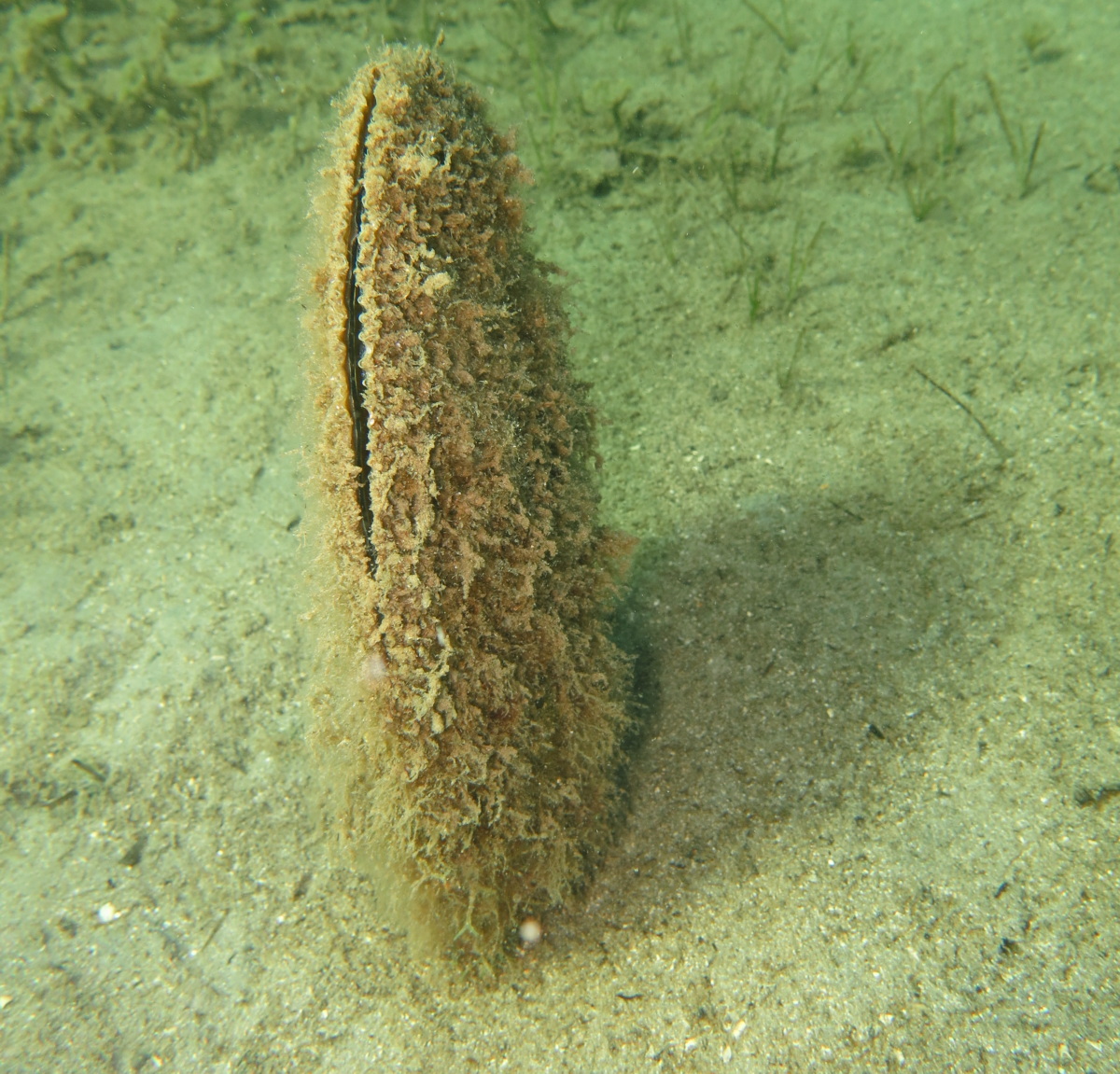 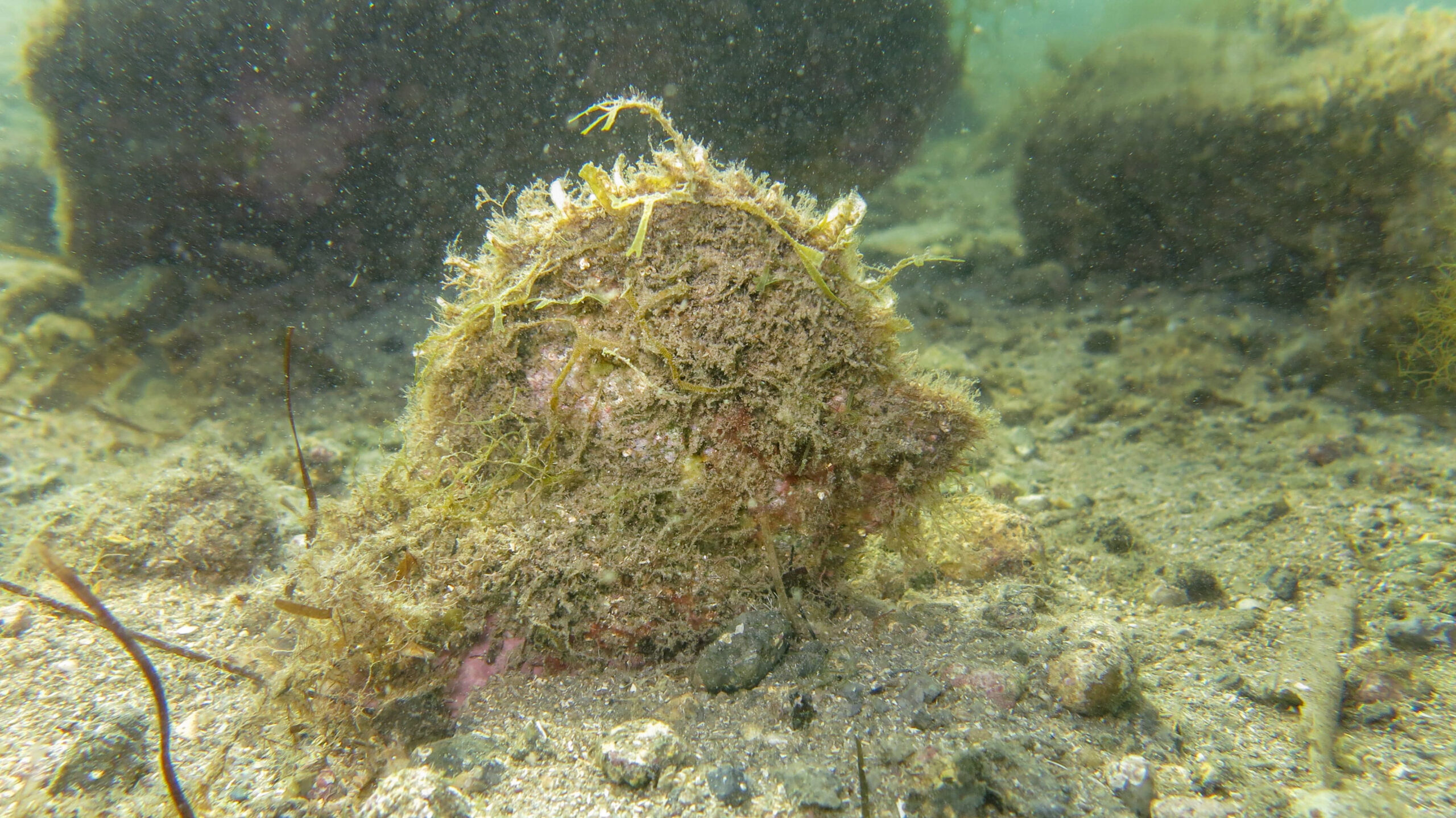 4. Check that Pinna nobilis is alive

Most of the individuals of Pinna nobilis that can be observed on our seabeds today are unfortunately dead. Often the large valves remain to lie on the bottom, but it is possible to see them in an upright position, fixed in the substrate, even in deceased individuals.

To check the viability of the organism, one only has to get close and gently brush the valves: in still-living Pinna nobilis, they should instinctively close.

Please note: dead Pinna nobilis individuals should not be taken, as their possession is illegal.

Having photographic or video documentation of Pinna nobilis is important to us. If possible take it from different angles, including reference points (such as a hand) in the image to help us understand its size.

6. Fill in the form: using the form below you can report a new sighting so that LIFE Pinna experts can validate the sighting. Some of the fins reported will be important in repopulating the Mediterranean with this species!

Form to fill out

We need your e-mail to receive your data and to contact you again in case we need to. It will also be useful for receiving the prizes that will be awarded to the most valuable submissions.

The location may also be generic. E.g.: Camogli, Portofino Protected Marine Area.
Coordinates are important. If you press geolocation you get the coordinates of the point where you are now (so it’s good if you’re by boat or canoe).
To enter the precise coordinates if you are not there, just locate the point on the map with Google Maps and click: the coordinates will be automatically transferred to the form. You can also view the map in full screen (top right).
In the notes, you can add any other interesting information, such as the type of seabed. The more details, the better.

Data are recorded and maintained by Triton Research, which shares them with project partners