A mollusc to be saved

On 2 December, the first public event of the European LIFE Pinna project, which aims to halt the extinction of the sea-bream, will take place in Genoa

On 2 December, the first public presentation of LIFE Pinna (LIFE20 NAT/IT/001122 PINNA – Conservation and re-stocking of the Pinna nobilis in the western Mediterranean and Adriatic sea), the four-year project aiming at protecting, monitoring and recovering the surviving populations of the sea shellfish, Pinna nobilis, the largest bivalve mollusc in the Mediterranean Sea, which has been decimated by an epidemic in recent years, will be held at the Galata, Museo del Mare in Genoa.

ARPAL, Liguria’s Regional Agency for Environmental Protection and Life Pinna’s coordinating body, will kick off the morning session on scientific aspects, dedicated to researchers, with speeches by all the project partners, who will present the results obtained in the first year of work and the objectives for the coming months. This will be followed by a session on networking, in which organisations and associations involved in other projects related to the protection of the marine world will take the floor. This will be an opportunity to open a discussion table to identify points of convergence and collaboration, and to share information and working methodologies. The morning will close with a round table to launch the work of the Scientific Committee.

The afternoon will be entirely dedicated to the general public and students. After a brief introduction of the Life Fin project, ample space will be given to the presentation of the important citizen science campaign “Report the Pinna!“. Ordinary citizens, who care about marine biodiversity, will be able to discover how to spot large bivalve molluscs that are still alive and report them to scientists. Finally, at the end of the day, the prize-giving ceremony of the photographic competition “Life among the reefs“, promoted by Triton Research last summer and aimed at those who, with a snapshot, wanted to tell the story of the beauty of the biodiversity that can still be found on the seabed of our sea. The competition was a great success, with more than 150 images sent in, some of them of great value. 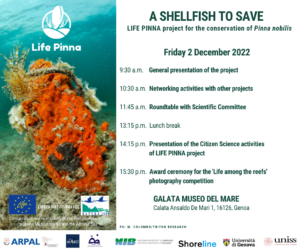